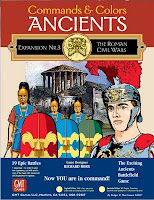 HeavyD and I decided on some Big Boy Blocks for this evenings game. As we have played through most of the scenario in the first three games in the series, I decided to crack open one of the most recent games, Expansion #3, "The Roman Civil War". I believe this is the first scenario from this expansion that we've played.

We started with the first scenario, "Colline Gate" which looked interesting. It has Walls in it and the Romans (HeavyD) start out in front of them in a rather precarious position given that walls will block retreat paths. We diced for sides I got the Samnites. The Samnites start with six Auxilia', two Medium Infantry, two Medium Cavalry and one light sling unit.  The Romans start with a slightly heavier force of six Medium Infantry, two slingers, two Medium Cavalry and one Auxilia. I have one leader and a four card hand size, while HeavyD has two leaders and six cards. I go first.


I open with a pretty good hand; I start with a "Double Time" allowing me to engage right away. I have three attacks on the first turn and all of them result in retreats. HeavyD also looses a couple of his slingers on the end of the line. As I was able to make him retreat my lighter Auxilia's are unscratched which helps as I am fighting at a disadvantage against HeavyD's Medium Infantry (3 dice to 3).


HeavyD counters by reengaging my right with most of the units I forced back. He also pulls some of the Mediums out of the gates. He lines up four units (M) to my three (A). My units perform very well, I believe the official term is something like "I diced the heck out of him". HeavyD looses one unit completely to a three flag roll on my part and has several others take a few blocks as casualties. One of my Auxilias is down to one block and the other two are still on good shape. Again though HeavyD has his back to the wall and is very vulnerable to retreat results, which will kill off his blocks due to the wall.


I counter with activating three units on the right, I focus all my attacks on one Medium infantry because my guys can only move one hex and be able to battle. I take out the Medium Infantry and very little loss during the combat phase. HeavyD counter's as he really has no other choice. He looses another Medium, while only taking down one of my Auxilia's two one block, I have two now on this side that are one-block wonders.


On my next activation I move up my Medium Cavalry to attack his remaining Medium Infantry and send my one-block Auxilia after his Slinger, who are trying blend into the wall that their standing next to. Not wanting to be left out of the action, my Cavalry unit performs well (I dice him again!) while the slingers fail their "blend in" task check, dieing as they try and flee over the wall. I end the turn with two more blocks, thus we are in sudden death mode as I only need one more to get the win.


HeavyD counters by moving his Medium Cavalry unit out with his leader. They roll up and waste my Medium Cavalry. I start to look at the left have side of the board as there are no more Roman's on my Right (sans the Cav unit that can withdraw). I again have a "Double Time" card when I need it and am able to advance most of my left up against his line. My dice are cooling off though and these battles do not go anywhere nearly as well as the opening rounds on the right. Neither one of us loose any units and I take slightly more losses then HeavyD.

HeavyD counter attacks and forces one of my Auxilia to flee. Then I play a "Order Three Left" card and move in against the Medium Infantry, while my Slingers attack HeavyD's Cavalry and Leader. The Slingers open with a bang, taking out the Medium Cavalry for the win.


This is a tricky scenario for the Roman player who starts with a nicer force, but in a very precarious position, having to deal with the wall. We had some good laughs at my command dice performance though.

As the night was still young, I offered to show HeavyD how to play Dominion. I had first seen this game six months ago while visiting Rikk out in Arizona. A few months after that trip, Rikk sent me a Dominion and Dominion Seaside out of the clear blue. He and I had the chance to play it 4-5 times recently while I was on another vacation back in Tempe. 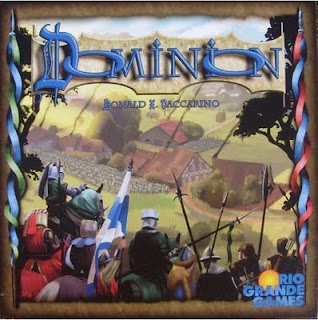 I really like this game. It's certainly a Euro, but its got some very nice mechanics and is a whole lot of fun to play. It's doing very well, getting good marks on BGG and there is a very favorable video review of it over at the Dice Tower.

So first an overview. The game is for 2-4 players and takes perhaps a half an hour per player to complete. Each player starts with ten cards (seven coppers and three estates). There are then tens stacks of face up cards that the players can buy during their turn to add to their deck. In addition to these ten cards, there are three currency cards (copper, silver and gold) and three stacks of VP cards (estate, duchy and province). These too are also available to be acquired (by purchase or other events) for addition to you deck.


The mechanics of the game are very simple, you start with your hand of five cards, you then take an Action (most of the cards you buy are actions [of the ten]) then you finish with a Buy. An action consists of "playing" an "Action" card; for instance if you play a "Village" card you are allowed to draw an additional card and then take two more action (playing two more action cards). Buying consists of using the money cards in your hand along with any extra money that your action cards have provided for the turn to purchase one or more card (you can only buy more then one if one of your actions gave you a +1 buy). The objective of the game is to have the most VP's at the end of the game. The game ends when all of the provinces are taken, or three of the 10 available cards are taken.

So this sounds pretty simple and it is, HeavyD grokked the mechanics within a couple of hands and we were off to the races. I was certainly no expert, having only played the game 3-4 times previously, so we had a nice time looking over the various cards and what they meant to us. There isn't alot of player vs. player interaction (in this configuration at least). Each of us bought "Militia" cards early on so for the first 5-8 hands we were using these cards a lot, these force the other player to discard down to three cards, thus he's starting with three instead of five cards.

There are something like 25 types of cards in the base game. You only will use ten during any one game, so this means that the game provides many re-playings as you mix and match the various cards you want to play with in any one game. The game comes with about 5 suggested sets of ten, but after that you are then able to construct your decks to meet whatever tickles your fancy.

I can't wait to play this one again...
Posted by Stephen Brasseur at 10:55 PM