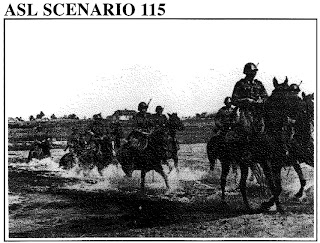 "Huns of Steel" came with the "Armies of Oblivion" module which introduced Allied Minor Armor to the game. I had not played to many of these scenarios as most of them are a bit larger. HeavyD and I were looking for something large to play and decided on this scenario. It's got an impeccable ROAR rating (18/20) and is heavy on Armor. The scenario takes place in July of 1942 after the Germans have turned South during Fall Blau. The recently arrived in Theater Hungarian 1st Armored Field Division has been tasked with reducing one of the three remaining Russian bridgeheads on the West bank of the Don River.

The map (boards 44, 48 and 43) are largely open with lots of grain and orchards. There is a long thing town in the middle of the map with many wooded buildings. The Rv1 overlay is user and creates a river on board 43. There are two multi-lane pontoon bridges spanning this river. ECs are dry with a mild breeze blowing from the NW at start. All of the Hungarian LT 38 tanks begin the game with their 4 FP BMG permanently disabled. The Victory conditions have the Hungarians tasked with clearing out two sets of hexes near in front of the pontoon bridges of Russian GO MMCs and AFVs with functioning MA. These hexes are open and site rite next to the river. There is a cluster of building commanding one of the victory locations, this is a strong position with several 1st level multi-hex stone buildings. The other victory location is lacking any real terrain other then a large amount of grain.

After I see HeavyD's set up its clear that he's going to make his stand in the town. In a few turns it will become more clear to me why he elected to do this. For now though I am thinking that with the mobility of my force that he's made the wrong decision. I would have set up a screen of Infantry in the town (4-6 squads) and little else, enough to keep my vulnerable riders honest. I would have based my defenses on the two river crossing area's. One of these are near a cluster of stone multilevel buildings while the other is really in the middle of a sea of wheat fields. Here though he could have taken advantage of the Wire and the Russians advantage at digging foxholes. This coupled with the arriving Russian armor would have, IMHO made a very tough nut to crack.

I set up and enter in two groups. The Cavalry with some of the armor is on the right while the motorcycle borne Infantry is entering along the road in the center. There is enough cover to allow me to cross most of the first board and dismount on the first turn. The turn is largely uneventful as hordes of Hungarian Infantry and Armor enter the board. My half of turn 2 sees the sea of green approach the town protected by its armor. I break an MA on a IVF2 but other then this there is not a lot of action on this turn either. Most of my armor is 1-2 hexes from the town with my Infantry right behind the tanks. Due to the many hindrances HeavyD is not afforded many opportunities to fire at me.


The bottom of turn 2 is when things started to get interesting. HeavyD's first set of armor arrives. He opens the turn by knocking out one of my light tanks on the right with his hidden 76L ART gun. He then sends two of his Stuarts over to my right, near the 76L ART. Another Stuart goes for the middle of town while the last one goes out on my left, alone. The two Valentines he leaves on the far side of the river...they're very slow.

Turn 3 see's me get the balance of my armor as reinforcements. I decide to send the two F2's over on my left and send the three F1's up the middle to help out clearing the town. A scenario of this size adds a level of thinking to contend with. I have to decide which area of the board should get reinforcements and which area's to focus my efforts on, most of the time the size of the scenario doesn't call for this sort of decisioning as its usually very straight forward. I really like the added layer of complexity here.

HeavyD's fortifications are making it much harder then I thought it would be to break into the town. He has wire covering a section of the town and both roadblocks are blocking the roads into town. I am forced to go around the wire and this is proving a challenge. It finally dawns on me that he's placed his HMG in the middle of the road to interdict my crossing it. This explains why he placed his ART over on my right and why he sent two of his Stuarts over there to support it. I decide to focus on the center of the town and on my left which is only covered by a lone Stuart. I make some progress in town but I have time on my side so I am advancing cautiously. During the bottom of turn 3 I finally start to break some of the towns defenders. HeavyD doesn't do much with his Stuarts on his turn, leaving them in place mostly.

Turn 4 sees a lot of action across the board. I start on the right side of the town. I place some smoke to cover my advance. I then drive across the street with a couple of the LT38s. I am giving him bad shot opportunities from his middle Stuart while I stay out of LOS from his ART gun and the Stuarts supporting it. I am trying to put pressure on the HMG. On the left side of town things are starting to crumble for HeavyD's defenders. I am around the wire and bring up the AA tanks to support my movements here. I send two F2's after the lone Stuart on my left which is unsupported and take it out with bounding fire. It's only the 2nd tank lost to either of us thus far in that game, we are both being very cautious with our armor. Little happens during the bottom of the turn other then HeavyD getting a leader creation at exactly the right spot (the middle of the town) and at the right time (he is leaderless this far forward). HeavyD elects to play it cool and doesn't try and press the issue with any of my forces mostly skulking or taking bad prep shots.


Turn 5 opens with my Infantry having cleared my side of the town with the HMG still able to shoot down the length of the road. Most of his initial infantry is not  on the board or trickling back the the stone farm area near the left hand bridge. I finally repair the MA of one of my F2's (75L) during the rally phase. I start by going after the Stuart in the middle and he misses his defensive fire shots at my F2, I stupidly think I'm going to drive a LT38 past the now fired Stuart when he nabs it with an adjacent intensive fire shot, this is my first tank lost in several turns. I am able to get smoke on the road and start moving Infantry across it. I send a lot of armor through the town. The two F2's go after a lone Valentine covering the left hand bridge, this also places them with good LOS's down the road that will see the T-34's arriving during HeavyD's turn. My right doesn't see a lot of action as HeavyD is still strong over there with his two Stuarts supporting the 76L.


HeavyD brings his T-34's on during his half of turn 5. They are radioless and thus are not nearly a mobile as they can be. He decides to send them after my two F2's covering the left hand bridge (near the stone farm).  I tag one of them before they reach the bridge. The other two make it across the river, I break a MA on one of the F2's intensive firing and get an acquisition with the other F2. The Valentine uses the arrival of the T-34s to make good his escape, driving into the woods across the river. The lone Stuart in the middle of the town is able to shock my F2 and then goes down from the fire of the other 3-4 tanks that are parked nearby. On my right HeavyD pulls the two Stuarts back towards the river, I have essentially forced him out of this position by my manoeuvrings. The HMG is still there but it shrouded in smoke and its armored protection has left it isolated.


Turn 6 opens with my two F2's, one of which has a malf'd MA sitting two hexes away from both of the T-34's. This action will be key, if I don't take these two monsters out I will have to send more tanks after them and they are now sitting literally in the victory locations. Things start out well on the prep fire phase when I immobilize one of the beasts forcing the crew to bail and then with my intensive fire shot I shock the 2nd T-34. During the movement phase I rush another F2 over where I have an LOS to the shocked T-34. I send another tank into the stone farm complex to compel the tanks crew to rout across the river instead of into the farm houses. The HMG finally dies in the close combat phase when I run a LT38 in there with a couple of squads.

Turn 7 sees me repair the MA of the F2 on my left. I send those two tanks across the bridge taking out the Valentine that is sitting on the bridge on the process. I send the other couple tanks in the area in to support the assault on the stone farm complex making it very warm for HeavyD's few remaining defenders. In the Center I send the rest of my armor into the grain field towards the second bridge. Here HeavyD has the Valentine sitting in the bridge entry hex covered by the two remaining Stuarts further back to my right. By getting this close to the bridge and threatening the Valentine I have forced HeavyD to counter attack into my tanks with his two remaining Stuarts. As my two F2's are on their way to the area and will arrive next turn its a futile plan at best and HeavyD throws in the towel. I have too many tanks remaining against his three. I also have two complete turns remaining to finish him off.

In the end the T-34's going down without taking out ANY of my tanks was the twig that broke HeavyD's back. That being said we played this scenario out over four days and eleven hours and we were both extremely happy with the scenario. This was easily one of the best ones we've played this year and I can see why its so tightly balanced on ROAR. I would eagerly play this one again as either side.


Posted by Stephen Brasseur at 11:06 PM 7 comments: Links to this post