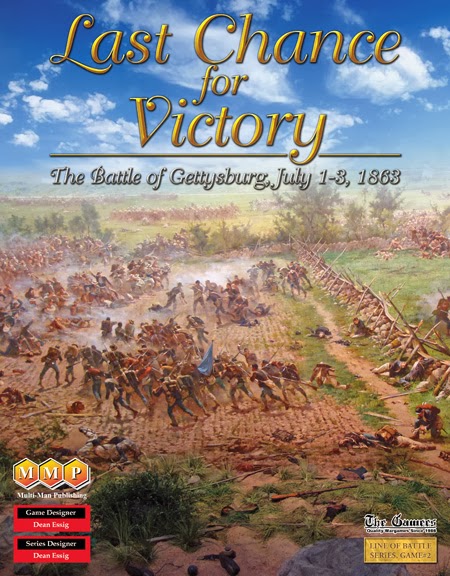 The second edition in the Line of Battle series is out and has been getting a lot of attention in St Louis since its release. Last Chance for Victory is Series designer Dean Essig's addition to the Gettysburg collection of simulations. This release also introduces the version 2.0 LOB rules. The package is impressive. The game comes with six maps, four of them when placed together represent the entire area around Gettysburg. The other two maps represent the major area's of the first and second day of the battle. These maps are for use with many of the small and medium sized scenario's included with the game. There are a total of 22 scenario. This is a blessing to those of us who are likely never to have the opportunity to play then entire campaign, but are more then willing to play (and replay) the many interesting smaller scenarios over and over again. The map itself is an impressive recreation of the terrain in and around Gettysburg in 1863. The counters are in the same format as the previous edition in the LoB series (None But Heroes).

While all of the physical components are first rate, its the words in the rules, scenarios and designer/historical notes that I am most impressed with. The v2.0 rules make several improvements to the already impressive v1.0 edition. These include a streamlined Orders process, Hexside terrain, new Artillery staking rules (Artillery cannot stack with other types of combat units), LOS Chart and many others. The areas in the rules that have changed are clearly identified and in many cases there is a text box with notes concerning the logic behind the changes. For me though the Historical and Design notes are worth the price of the game alone. They contain fascinating insight into the designers thought process, reasoning and historical research. There are nearly 20 pages of this and its easily some of the most interesting reading I have done by a game designer sharing his thoughts on a wide range of topics and how he translated his passion for this period into a clean and effective yet highly playable simulation.

I could go on for hours...but lets get to the game. First a little about what we have been doing with the game here in STL since its release. My two primary face to face partners are both passionate ACW regimental scale fans. They have played most of all of these systems over the years, while this is my first and only time playing an ACW regimental scale game. It was their passion for the initial LOB game that got me interested and I am very grateful to them for introducing me to this series. So when the game was released we immediately started playing. There is a very nice little training scenario with its own 8x11 map (the map is only about 50% of the page, the rest covers the units and details for the scenario. After playing that one a couple times we moved on to play some of the smaller scenario's (2nd battle of McPherson's Ridge, Flying Dutchmen). These are great scenario's as they are light on the orders and command areas in the rules and allow the player to focus on playing the scenario using the pre defined orders that the actual sides had in the real thing.

The Best Three Hours of Fighting Anywhere (7.9) covers Longstreet's Assault on the exposed III Corps of the Army of the Potomac (2nd day of the battle). The scenario starts at 3.45PM and goes until 8.00PM (turns are 15 minutes each). The scenario uses the 2nd day map (again I can't express how nice it is to have these two maps included in the game). While the scenario starts out with about three divisions of CSA units (Longstreet's two divisions and most of Anderson's) and all the III and II Corps of the AoP, not all of those units are active at the start of the scenario, the 'In Echelon' orders that the CSA player is under means that you start out with only one of the divisions active (Hood's), with the others coming online throughout the scenario. Bob will be playing the CSA side while I will play the US forces.

Initial set Up, Orders and Objectives

Bob's Orders start with Hood's Division opening the assault on the Union left. His units are to attack into the Rose's Woods, The Wheat Field the then up the Emmitsburg Road towards Cemetery Ridge. Hood is to lead off the attack at once (start of scenario) and then wheel left to maintain contact with McLaw's Division. McLaw's is to attack with Kershaw and Semmes at 4.45PM (4 turns into the scenario), Barksdale and Wofford's brigades are to join the assault at 6.00PM. McLaw's Division is to wheel left so as to attack up the Emmitsburg Road towards Cemetery Ridge. Anderson is to directly assault Cemetery Ridge beginning at 6.30PM.

The victory conditions consist of the CSA player accomplishing three goals. First the Alexander Artillery Battalion is to move its HQ to S9.28 (the Peach Orchard) and unlimber its guns so that they can apply direct fire to Cemetery Ridge. Second, the CSA player needs to clear out the Wheat Field of Union combat units. Finally at least 10SP of CSA Infantry must be within 3 hexes of N58.40 (Cemetery Ridge).

The Union player starts with Sickles' III Corps deployed awkwardly along the Emmitsburg Road, then curving back to the Wheat Field with the left flank resting on Devil's Den (in front of Little Round Top). Hancock's II Corps has two Divisions posted on Cemetery Ridge, these units are not able to be given orders until 5.00PM. The Union player also has units of V Corps arriving as the scenario starts behind the Union lines. These arriving brigades have movement orders (two brigades actually have attack orders) that have them moving in behind the lines of III Corps. The exception is Vincent's brigade, which moves to a spot and then allows Vincent to write his own orders assuming he can make a Command role (easy as Vincent is a 4 Leader). This allows the historical performance to develop in the defense of Little Round Top. The Union player also has the AoP Artillery Reserve deployed behind the lines that is free to (via Posting and Initiative Orders) move itself forward into the fray (which happened historically).

As you can see, this is not a simple attacker/defender scenario. The CSA player is attacking yes, but the Union player is actively trying to plug holes and deploy his forces once they arrive. Bob and I are excited as this scenario will be our first real work out with writing orders and using the new command rules in v2.0. We've already reset the scenario once as we (that is "I' totally blew that) totally blew the use of the AoP Artillery Reserve (which is important).

As we are now actually doing these opening turns for the second time in a few days, we quickly move through them. Confederate Artillery starts things off by opening up all along the line at exposed Union units (range 5-10). These are mostly noise making shots, however when its my turn I pull back several of the exposed units to be out of LOS so as to not expose them to prolonged shelling. I lose a gun or two and a couple regiments involuntarily reposition themselves to the rear...and then it quiets down as Hood's leading brigades enter Rose's Woods and approach Devil's Den.


Bob decides to have Law's Brigade attack the Southern portion of Devil's Den with Robertson's Texas Brigade supporting them. G. T. Anderson's Brigade is on the left of Robertson moving towards the Wheat field. Law's initial attacks against the 4th Maine and Smith's Battery go very poorly. Several failed moral checks or failed closing rolls shockingly stop these attacks cold. I move the 99th PA over to cover the left of the 4th MA while the rest of Ward's (2/1/3) brigade start the engage Benning's GA Brigade. Bob is electing to shot instead of charging in several cases and I think he's being to protective of his units as he's not making much progress at all. My dice are of course also the reason Ward's Brigade is making such a fine stand.

Meanwhile I am using Initiative Orders to deploy two Artillery Brigades (Ransom's 1 Reg Arty and Robertson's 1 Horse Arty) forward to set up behind Devil's Den and the Wheat field. Vincent arrives and I write movement orders for him to move to Little Round Top and defend it (I couldn't help myself here...even though at the time of the decision Ward is still holding onto Devil's Den and Bob is not faring much better in the Wheat Field. Our interpretation of Vincent's special rules means that I can again use an Initiative attempt of his to write new orders, which I can either make an Attack or a Movement order.

G.T. Anderson's Brigade bumps into de Trobriand's (3/1/3) Brigade on the Western side of the Wheat Field. Again here Bob has limited success as the Union regiments here make some impressive morale checks to stand against those big Georgia Regiments of Anderson's.


The fighting on Devil's Den and on the outskirts of the Wheat Field rage on with the Union trading SP for time. Bob's losses are mounting but nearly all of the combats for these couple turns are in the Unions favor and as 4.30 approaches I am amazed the most of my initial III Corps line is still holding. Meanwhile I have roughly three Brigades now in the area, two of which actually have attack orders (Sweitzer [2/1/5] and Tilton [1/1/5]) pointing them at the Wheat Field. Vincent is deployed on Little Round Top along with two batteries.

4.45PM is the turn that the tide starts to turn at the Triangle and Houck's Ridge (Devil's Den). The 4th MA (B, R6) is pushed out of the Devil's Den hex after holding it much longer then I though they would. Smiths Battery is down to three guns (A, R6) and amazingly still sitting atop Houck's Ridge. Ward and the 124th NY are still holding the Triangle while the 86th NY falls back. The last Regiment in Ward's line, the 20th IN (B, R8) is trading SP's with the 1st TX (A, R9).

In the Wheat Field, Anderson is finally pushing the Michigan Regiments back with the 59th GA (B, R11) having the most success driving straight into the edge of the Peach Orchard. On my turn Sweitzer and Tilton both roll into the Wheat Field and bump into the 1st and 5th TX Regiments from Robertson. V Corps is on the scene! McLaw's leads off with Kershaw approaching the Peach Orchard with Semmes right behind him.

Email ThisBlogThis!Share to TwitterShare to FacebookShare to Pinterest
Labels: Last Chance for Victory, Line of Battle