Email ThisBlogThis!Share to TwitterShare to FacebookShare to Pinterest
Labels: Ardennes '44 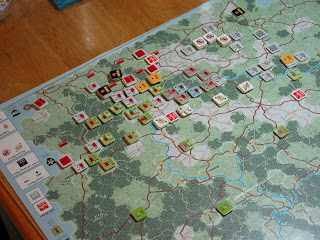 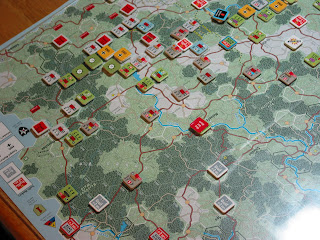 In the AM turn, the gate was open and I was able to move both Panzer divisions deep into Bobs rear. This might be a game-ender...we'll see. I also was able to move next to one fuel dump and it was the actual dump. I attacked it and was able to secure it. Additionally, I was able to attack and eliminate two artillery batteries and encircle most of the rest of the 99ID as well as other elements. Now the race is on as Bob got the 11th Armored Division as reinforcements in his AM turn and they are moving in. Bob pulled out the 99th and 2nd and is attacking West trying to break out. 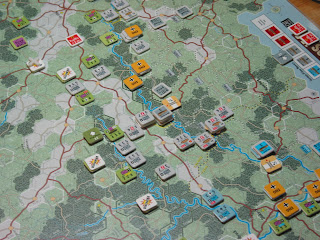 In the Center I moved the 2P around Clervaux and went after the 9th Armors CCR. Lehr moved up slowly across their bridge and focused on Clervaux. I continued to attack towards St Vith with the 116th PD and the VD divisions in the area. These attacks went poorly with me loosing several armored steps and not making much progress.

The 7th Army made very little progress except near the seam with the 5th Panzer army, here he is still falling back and trying to establish a line. Elsewhere along the 7th Army's front I have taken 4-6 steps in losses and he is still holding his initial line.

There was a lot of down time while we each did our turns. Also, the next time I play this game I have to make a list of all the little details that happen in the first couple of turns: 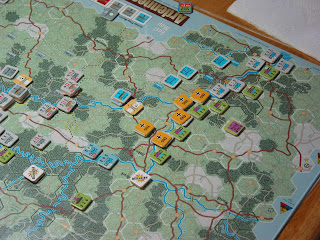 Overall a very good time though. I love the puzzle that this game presents each player with. You have so many holes to exploit of fill, agonizing combats to decide on and deciding which artillery units to flip or move. Good Stuff.
Posted by Stephen Brasseur at 10:15 PM No comments: Links to this post

Email ThisBlogThis!Share to TwitterShare to FacebookShare to Pinterest
Labels: Ardennes '44 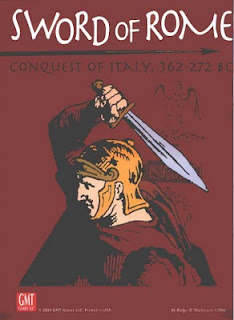 This was our first 4-player game of SoR in several years. HeavyD and I were playtesters and played it several times back when it was released. With the Release of the 2nd Printing, we decided to give it another go as we've been trying to get back into multiplayer games with more regularity.

The game is a 2-5 player game (best with 4-5 players, in my opinion) covering Rome's assent to power from 386BC to 272BC. It is a card driven game with many of the features of this genre; leader activation, political control of spaces and a very interesting combat mechanic.

In the past few weeks I've re-read the rules and played a 2-player and 3-player game, both were more or less trainer games, getting ready for this event. The 3-player game was ok, it was our first time back with the game and it was ok. The Guals are handled abstractly, by rolling on a chart once a turn, the players then play Rome, Etruscan/Samite and Greece. The Guals being abstracted really changes the dynamics and makes for an ok three player experiance, for my money, TNW is the better choice when you only have three players. The 2-player game is ok, but I'd rather play something else if there are only two of us, too much of the interesting bits are missing when each player is controlling two powers, however it was a good experience for learning the ins and outs of the games mechanics.

Today's four player version was hands down the best of the recent playings. We had three players that had experience with the game and one player with no background. In spite of this, today's game was one heck of a good time. I was Rome, with HeavyD taking the Gauls, YJ on the E/S and Bob with Greece. We played the 6 turn version and it came down to the last impulse of the last turn. Bob won with Greece, with my Romans a VP or two behind. HeavyD had Gual in third place with YJ a distant fourth with his Etruscans and Samnites. 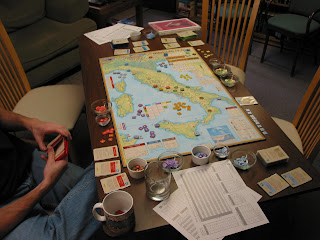 I'm sure if you asked the players involved you'd get several different explanations of why the game turned out like it did. But in the end it was essentially the three of them trying to get Bob the win over my Romans. An early alliance (and some would say a poorly conceived one) gave Rome a very safe and strong position in turns 2-3 allowing me to boost my support in my cities while also creating several more walled cities, thus by the last couple of turns I was getting 7-8 CU's a turn as reinforcements while everyone else was struggling to keep an army in the field. All of the Etruscan starting lands were overrun in this period, knocking YJ out of the running for a victory. This also made it very hard for HeavyD to raid and thus get VP's...so both of them, around turn 4-5 started to play king maker, essentially doing what they could to assist Greece and trying to bring down the now very strong Romans.

Despite this (three against one) I had a fantastic time. The constant conflict (in spirit at least) between HeavyD and YJ on their differing takes on what should be done was an especially entertaining diversion. The next time have a multiplayer game day, I hope we have half as much fun as we did today...

I would move SoR up to nearly neck and neck in the 4 player game area after today's experience (after TNW of course). I shall try to set up another game of this in the coming weeks.
Posted by Stephen Brasseur at 10:39 PM No comments: Links to this post

Email ThisBlogThis!Share to TwitterShare to FacebookShare to Pinterest
Labels: Sword of Rome 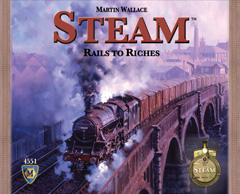 Steam is a 3-5 player train game. Each player tries to build out track and haul goods, earning money and/or victory points. This was the second and third time I've played the game. I really like it, but its one of those games where I know I'll never be competitive at. I understand the mechanics of the game and think they're really neat, but when it comes to knowing how to maximize my move in relation to the other players (mainly YJ here) I am at a loss. Perhaps its a game where playing it a bunch would lead to that, however, like Agricola it's not likely going to be played by us that often.

The first game was Dave's first one and YJ and my second. We mostly re-learned the game and taught it to Dave at the same time. Then we ran out of time as HeavyD showed up, so we restarted on the other central Europe map (included on the back of the NE USA map). The second game went the distance with YJ having a 5-7VP lead, Dave was in second with HeavyD a distant third and myself in the distance in fourth place. Even though I knew I was loosing fun was had by all. I imagine the next time this one will be played is when we have another visit from Dave.
Posted by Stephen Brasseur at 9:06 PM No comments: Links to this post

Email ThisBlogThis!Share to TwitterShare to FacebookShare to Pinterest
Labels: Steam

Tonight Bob and I started A44, the six turn scenario. It being December 16th and all we decided to give this game another go. Bob and I had both recently played Simonich's N44 and TCC and enjoyed them. We had played this title about a year ago and liked it. My current favorite Bulge game remains Bitter Woods, but A44 is a close 2nd.

I had a pretty good start, I rolled a lot of 1's and 2's, thus pushing Bob's troops off his starting line. We averted a near disaster near Clervaux when I had the 2nd Panzer Divisions Panther Battalion cross the Our River at Dasburg in error. The attack went well and I got another attack due to the Breakthrough Combat (19.4) result, so I advanced to Clervaux and pushed the 9th Armored Division battalion out of town...luckily we caught the error (vehicle units cannot cross and unbridged river) and we were able to redo the attack, which still went very well for me.

In the North things also went well. I should be able to make good progress with the 1SS and 12SS in the PM turn. As you can see the Losheim Gap is open, I should be able to have the 1SS attack near Andler this next turn. I hope the 3FJ can continue to push the 99th back to Bullingen (1731).

We plan to resume on Sunday.
Posted by Stephen Brasseur at 9:52 PM No comments: Links to this post